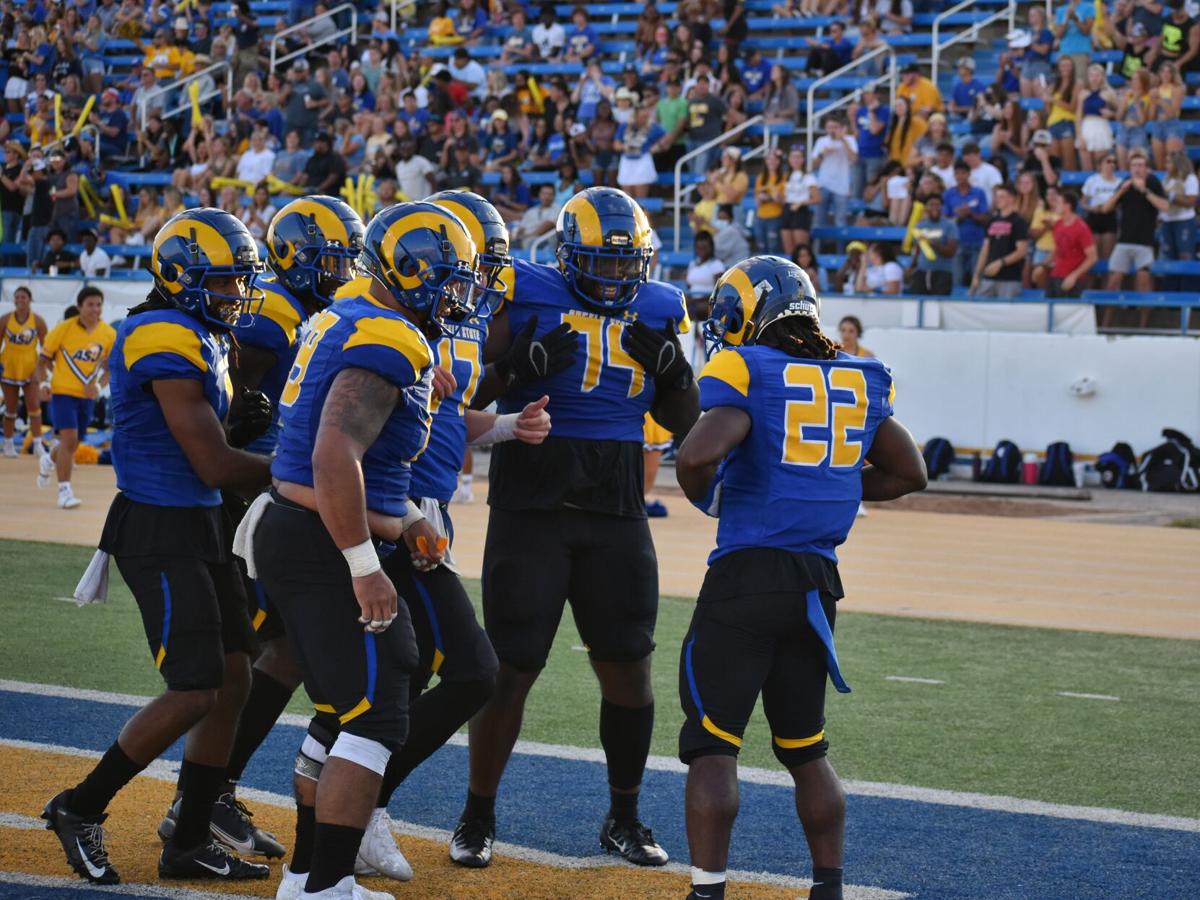 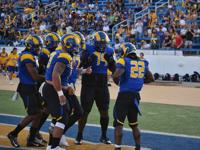 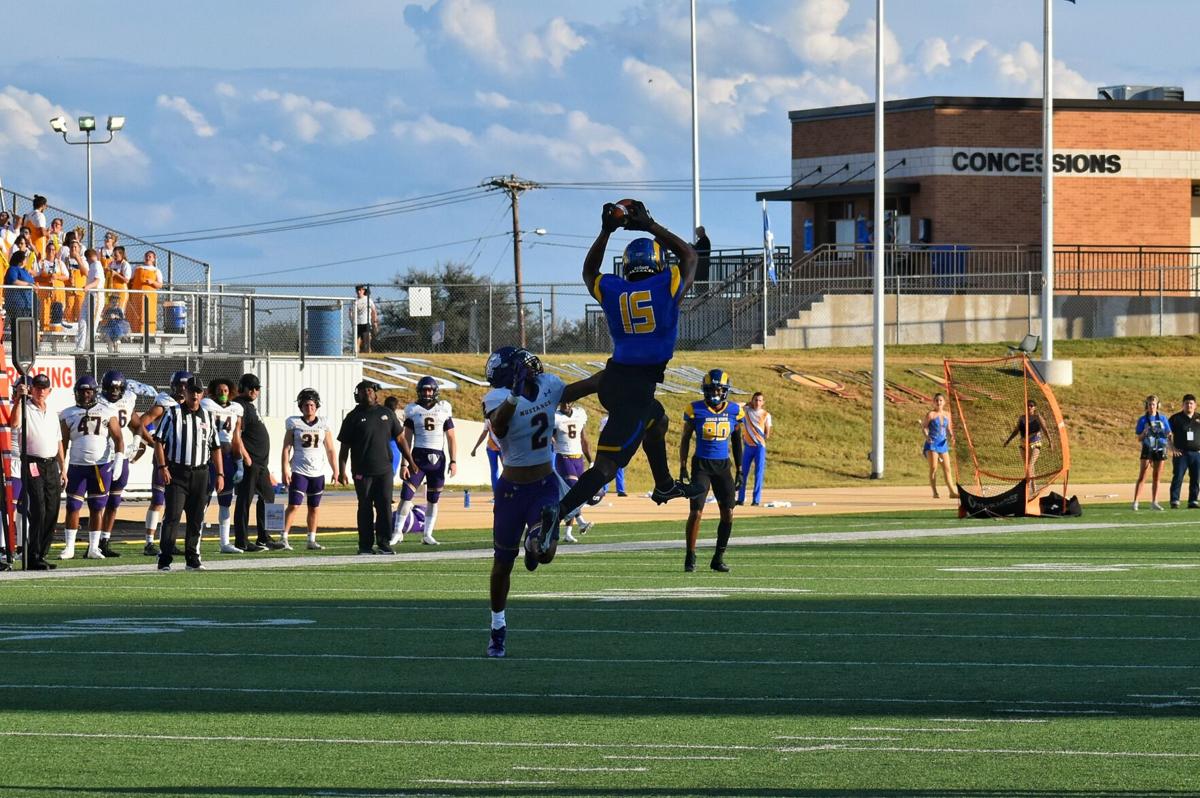 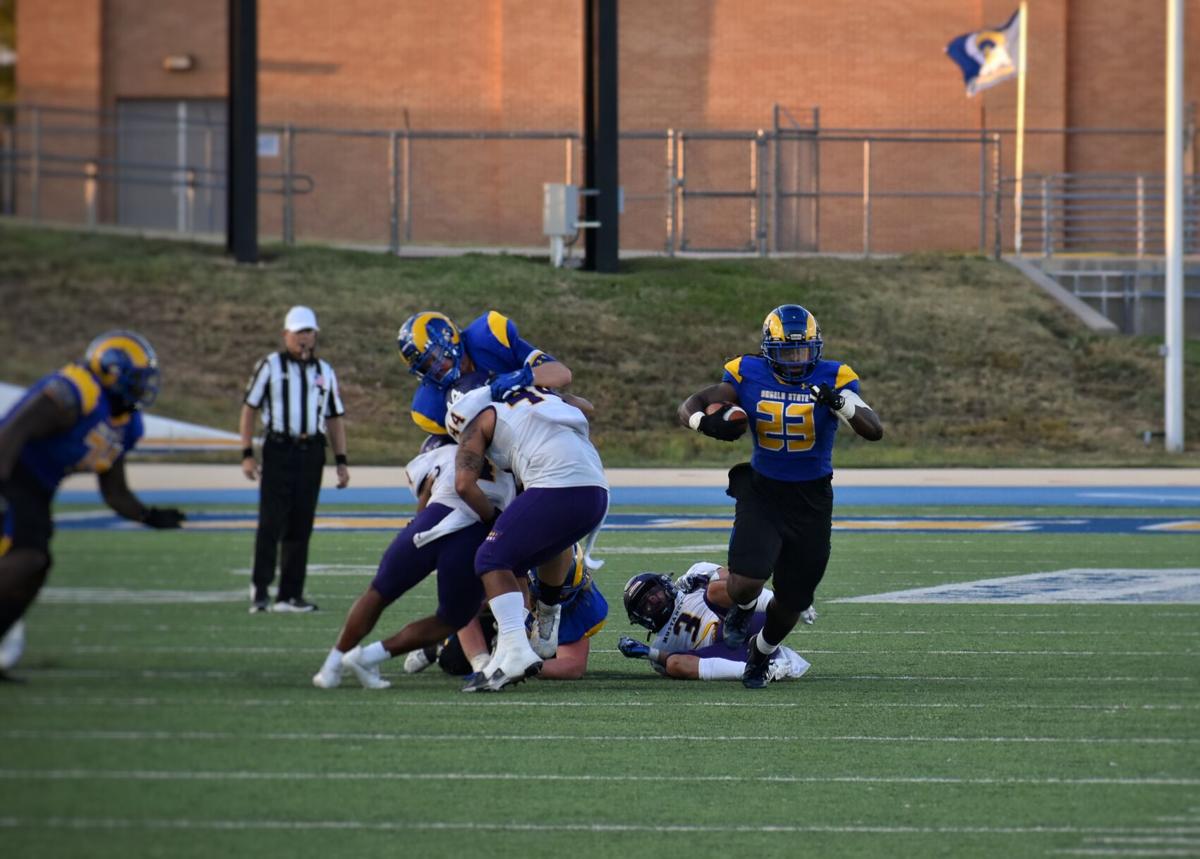 The ASU football team hosted Western New Mexico on Saturday, Oct. 2 at LeGrand Stadium at 1st Community Credit Union Field. The Rams would send the fans home happy after exploding to a 62-3 victory over the Mustangs.

The offensive explosion began midway through the first quarter as Hagen Garvin completed a pass to Noah Massey for 27 yards to set up a 19-yard touchdown run by Nathaniel Omayebu III for the opening salvo of the game. He would finish the game rushing for 92 yards and a touchdown on 14 carries.

Near the end of the first quarter, Garvin found Alfred Grear on a screen pass and let him take it 43 yards for a touchdown to expand the Rams’ lead to 14. This is Grear’s first game back since being injured in the opening game of the season against Lindenwood.

“It feels great to be back,” Grear said, “I appreciate the coaches, the training staff and all my fellow teammates for the support and keeping me right mentally.”

The Blue and Gold would keep the offense going into the second quarter. Kason Phillips opened the drive with a 19-yard run which would contribute to the eventual 24-yard touchdown pass from Garvin to Kellen Pachot to move the lead to three scores.

Five minutes into the second quarter, a Mustang pass would be intercepted by Josh Quinton in WNMU territory. ASU will take advantage of the turnover on the ensuing drive as Phillips would break away for a 37-yard touchdown run. He would go on to rush for 124 yards and two touchdowns in the win, all firsts in his collegiate career.

“I got to give credit to the [offensive] line,” Phillips said in response to his first 100-yard game, “We dominated up front and it was a complete team win.”

Following a Mustang three-and-out, ASU put together a six-play drive to set up a 39-yard field goal for Asa Fuller to put the Rams up 31-0.

On the first play of the ensuing offensive drive, Grear would break away and outrun every Mustang defender for 86 yards to put the Rams up 38-0 going into halftime. Grear ended the game with 149 total yards and two total touchdowns on the night.

The Rams would get the ball to open the second half and keep the foot on the gas as Garvin found Rasheen Green for an 11-yard and a 17-yard pass to put them in Mustang territory and set up a 40-yard rush for Phillips to get the Blue and Gold inside the 10-yard line. However, they would have to settle for a 16-yard field goal for Fuller to make the lead 41-0. Fuller ended the game two for three on field goals but was a perfect eight for eight on extra points.

On the ensuing defensive drive, ASU forced WNMU to punt, Andrew Pitts would return the punt 80 yards before he was tripped up at the Mustang five-yard line. This set up a Phillips’ second touchdown on the night to extend the Rams lead to 48.

After forcing another Mustang three-and-out, Garvin would find Kyle Bradford deep for a 76-yard touchdown to make the deficit even wider. Garvin would add another touchdown on the night in the ensuing drive, this time finding Green on the left sideline for a 28-yard score to make it a 62-0 game going into the fourth quarter.

“I felt like we were more confident,” said Garvin, “we came out and just took what they gave us.”

Garvin completed 11 of 16 passes for 276 yards and four touchdowns in his second start of the season.

Western New Mexico would ruin the shutout late in the fourth quarter after piecing together a 13-play drive that would result in a field goal to put the game at its final score.

The Rams improve to 4-1 on the season and 1-1 in LSC play as they look ahead to their road trip to Canyon, Texas where they will face off against the West Texas Buffs on Saturday, Oct. 9.