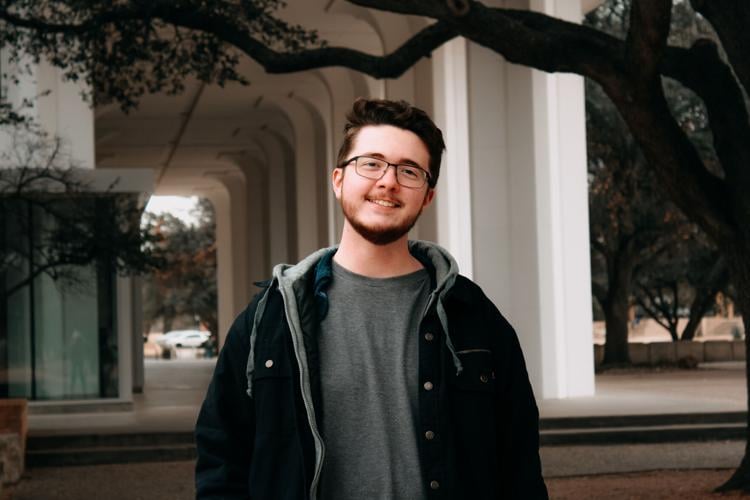 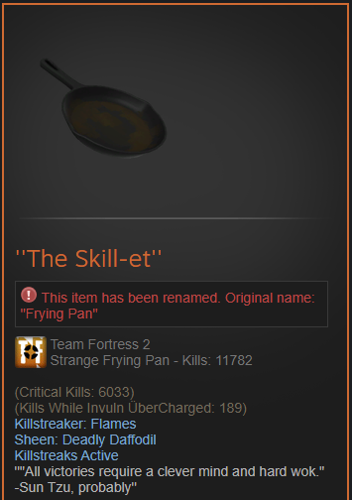 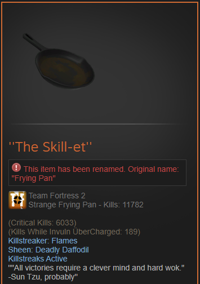 On Oct. 10, 2007, “Team Fortress 2” was released. Created by the Valve Corporation, the team-based shooter quickly became an icon in popular culture thanks to its hectic gameplay, cartoonish art style and easily-recognizable characters, among other things.

With such widespread popularity came opportunities for profit, which the game’s developers took by storm. Cosmetic items ranging from taunts, outfits and the ever-popular hats were rolled out by the crateful, later prompting the developers to give the game the moniker of “America's #1 war-themed hat simulator” in an update article. On top of these cosmetics came promotional items for other games, such as a frying pan melee weapon from one of Valve’s other titles, “Left 4 Dead 2.”

That was the first mistake. The weapon immediately became a source of boundless joy for those who wielded it, as the loud pan-clanging flooded servers worldwide. This widespread love of the cooking utensil gave way to “Strange Grease,” an item players applied to their frying pans to track specific statistics. A tracker for enemies killed is the default for all Strange-quality weapons, causing prices for the grease to skyrocket due to the pan’s popularity.

That was the second mistake. I was one such frying pan enjoyer, and the proposition of having an unreasonably high kill count attached to such an impractical weapon made something click in my head. I made up my mind then and there that in a world of miniguns, flamethrowers, rocket launchers and invincibility-inducing medical equipment, I wanted to be the guy unabashedly running around with cookware as their tool of destruction.

Cut to me in the spring of 2020, stranded at home in the wake of the COVID-19 pandemic with far, far too much time on my hands. The grease was just over $200, which I thankfully had due to my $9 an hour job. As I hovered my cursor over the button to confirm my purchase, I asked myself whether this was really worth it. I clicked.

What happened next was nothing short of life-changing. Thanks to the free time allotted to me by the sudden cessation of my entire day-to-day routine, I poured hours into using the pan. I wasn’t good at it at first, but my lack of skill would be remedied with time and effort. I found myself forgoing any semblance of a ranged weapon in favor of closing the distance with my targets, perfecting my movement to dodge bullets and explosives alike and even teaching myself how to fly across maps using slopes in a process called “trimping” by the game’s community.

Hours became days, days became weeks, weeks became months and months became years. I went to college and got a new job, friend group and day-to-day routine. In two years, I went from barely knowing a thing about the game to being actively invested in its community, from being in the background of the servers I found myself in to actively receiving screams of praise and terror from those playing with me. I felt accomplished.

Yet, deep down, I also felt empty. In the process of learning all of the new techniques and racking up a kill count, I had lost myself. The joke had become much more serious, and what started as a fascination with a weapon became an obsession with self-perfection. The rush of happiness I felt from running around games with a frying pan was slowly fading away, and I knew that if I were to keep from losing it entirely, I would have to answer the daunting question I asked myself two years ago. So I stepped away and thought. I detached myself from the game, making it a point not to think about it to reflect and reconnect with my other favorite pastimes.

In due time, I found the answer I had been looking for: yes, it was worth it. Though I had spent hundreds of hours - well over 900, at this point - arbitrarily swinging away with a frying pan to prove a point to myself, I ended up learning something new, something more than any technique a video game could teach.

I learned moderation. Like many a parent has said to their children, fun is good in moderation. You can enjoy your hobbies and personal passions to your heart’s content, throwing caution to the wind in favor of the thrill of doing what you love. Don’t let it consume you, lest you find that what you once found great joy in has since dulled.

I still play “Team Fortress 2.” I still carry that frying pan into every fight, knowing that if push comes to shove, I can always count on my skillet to kill it. Yet, with the hours of experience I’ve gained over the years under my belt and the life lessons I’ve learned firmly in my heart, I carry on the way I should have from the get-go - with appreciation and respect for what I cherish.